IN THE AGE OF LIEBERMAN - Rob Eshman

February 25, 2009
In the Age of Lieberman
By Rob Eshman
http://www.jewishjournal.com/opinion/article/in_the_age_of_lieberman_20090225/ 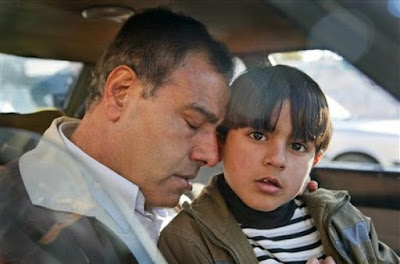 My affiliation with Israeli hospitals began some 20 years ago, after I read a book by Israeli researchers in the field of fertility, which was of particular interest to me. I had just returned to Gaza after completing a residency in obstetrics and gynecology in London, and working thereafter in Saudi Arabia. I got in touch with Prof. Mark Glazerman at Soroka Medical Center, Be'er Sheva, who agreed to receive female patients of mine for consultation and treatments not available in Gaza. Periodically I would bring patients in my own car, and sometimes in a small minibus that carried between 12-15 women to Soroka. I realized that cooperation with the Israeli health-care system would benefit many of the patients.

In 1994 the United Nations requested that I take charge of women's health care in Gaza. After three years of unsatisfying administrative work, I wanted to go back to practicing medicine. I learned Hebrew at an ulpan and, in 1997, I applied for a residency at Soroka. I loved every day spent at that hospital, and all of the people there. To this day, we maintain good friendships. Later on I completed a master's degree in the United States from the Harvard School of Public Health, and served in Kabul as an adviser to the Afghan health-care system.

Later I returned to the Gaza Strip.

I found a poor health-care system in the Strip. Anyone who steps into a pediatrics ward at Sheba Medical Center or Sourasky Medical Center will encounter a large number of Palestinian children. Many are happy to receive treatment in Israel, which has one of the best health-care systems in the world. Cooperation between the two systems exists, although not to a satisfactory degree.

This cooperation can be compared to "medical tourism," except that in places where such tourism exists, the person plans for the treatment, comes to the hospital, and even has fun. Here, one finds an abnormal system of medical tourism, between two peoples engaged in conflict - a fact that exacerbates the patients' suffering. The convoluted bureaucracy involved in obtaining guarantees of insurance coverage, and security permits for crossing into Israel from the Gaza Strip complicates matters. Even when someone manages to get treatment in Israel, he has difficulty returning for a follow-up appointment and continued treatment, because nobody promises to grant him those permits.

Another problem is the lack of communication between the physician who sends the patient from Gaza and the physician who handles the case in Israel. Frequently the patient's condition deteriorates upon returning to Gaza, and the doctor there is not up to date regarding his treatment history.

This system has been in place for years, but no one has looked into ways of improving treatment so as to make things easier for Gazans. In a research project I have initiated, we are studying the mechanism for transferring patients, with the aim of streamlining it.

I recently received a job offer from the University of Toronto. However, the tragedy we suffered changes all our plans, and I am now incapable of thinking about the future.

Dr. Ezzeldeen Abu al-Aish, who lost three daughters and a niece in an Israel Defense Forces strike in the Gaza Strip last month, responded Wednesday to an IDF statement confirming that it was Israeli fire that killed his daughters, thanking those responsible for investigating the incident and saying that "we all make mistakes, and we don't repeat them."

Abu al-Aish, a father of eight, became one of the symbols of the Gaza offensive for Israelis after he captivated TV viewers with a sobbing live report on the death of his three daughters and his niece in Israeli shelling. The 55-year-old gynecologist trained in Israeli hospitals and speaks Hebrew.

The IDF announced earlier Wednesday that an investigation into the January 16 incident confirmed that it had been Israeli fire that killed the four girls.

"First of all, I would like to thank all those who worked, and had the courage and good conscience to shed light on the truth that I always believed. Thank you to everyone who took upon themselves to publicize this truth seeking investigation," Abu al-Aish said in an interview with Channel 2.

Abu al-Aish did not neglect to thank the Israelis who met with him and offered him strength, saying "the love that I've received, from people I knew and people I didn't know, gave me strength."

The IDF released the conclusions of its investigation into the incident earlier Wednesday, explaining that Golani troops had been fired upon by snipers situated in the house adjacent to Abu al-Aish's home. The troops identified suspicious figures in the upper levels of the doctor's building, and deduced that they were serving as observers, directing the sniper fire from their vantage point.

Following long deliberations and assessments of the situation, the Golani commander decided to fire tank shells at the building, and when the soldiers heard the screams and realized civilians had been hit, they helped evacuate them, the investigation revealed.

The army argues further that the residents of the neighborhood were urged to evacuate the area prior to the attack via thousands of leaflets that were disseminated in the area, and that the doctor was personally asked by phone to evacuate his family from the neighborhood due to the fighting.

Abu al-Aish denied that there were any militants in the building at the time of the shelling.

The IDF spokesman's office issued a statement extending the IDF's condolences over the incident, but maintaining that the IDF operated within reason in light of the sniper fire directed at the troops and the heavy fighting in the region.