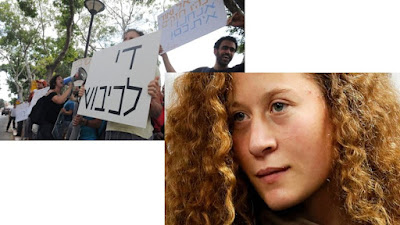 My daughter, these are tears of struggle Ahed Tamimi's father: I'm proud of my daughter.
By Bassem Tamimi | Dec. 29, 2017 |
This night too, like all the nights since dozens of soldiers raided our home in the middle of the night, my wife Nariman, my 16-year-old daughter Ahed and Ahed’s cousin Nur will spend behind bars. Although it is Ahed’s first arrest, she is no stranger to your prisons. My daughter has spent her whole life under the heavy shadow of the Israeli prison — from my lengthy incarcerations throughout her childhood, to the repeated arrests of her mother, brother and friends, to the covert-overt threat implied by your soldiers’ ongoing presence in our lives. So her own arrest was just a matter of time. An inevitable tragedy waiting to happen
Several months ago, on a trip to South Africa, we screened for an audience a video documenting the struggle of our village, Nabi Saleh, against Israel’s forced rule. When the lights came back on, Ahed stood up to thank the people for their support. When she noticed that some of the audience members had tears in their eyes, she said to them: “We may be victims of the Israeli regime, but we are just as proud of our choice to fight for our cause, despite the known cost. We knew where this path would lead us, but our identity, as a people and as individuals, is planted in the struggle, and draws its inspiration from there. Beyond the suffering and daily oppression of the prisoners, the wounded and the killed, we also know the tremendous power that comes from belonging to a resistance movement; the dedication, the love, the small sublime moments that come from the choice to shatter the invisible walls of passivity. 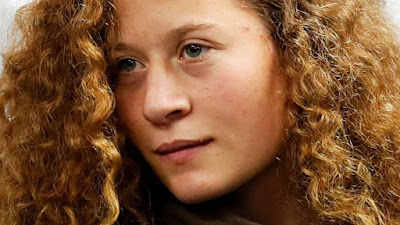 “I don’t want to be perceived as a victim, and I won’t give their actions the power to define who I am and what I’ll be. I choose to decide for myself how you will see me. We don’t want you to support us because of some photogenic tears, but because we chose the struggle and our struggle is just. This is the only way that we’ll be able to stop crying one day.”

Months after that event in South Africa, when she challenged the soldiers, who were armed from head to toe, it wasn’t sudden anger at the grave wounding of 15-year-old Mohammed Tamimi not long before that, just meters away, that motivated her. Nor was it the provocation of those soldiers entering our home. No. These soldiers, or others who are identical in their action and their role, have been unwanted and uninvited guests in our home ever since Ahed was born. No. She stood there before them because this is our way, because freedom isn’t given as charity, and because despite the heavy price, we are ready to pay it.
My daughter is just 16 years old. In another world, in your world, her life would look completely different. In our world, Ahed is a representative of a new generation of our people, of young freedom fighters. This generation has to wage its struggle on two fronts. On the one hand, they have the duty, of course, to keep on challenging and fighting the Israeli colonialism into which they were born, until the day it collapses. On the other hand, they have to boldly face the political stagnation and degeneration that has spread among us. They have to become the living artery that will revive our revolution and bring it back from the death entailed in a growing culture of passivity that has arisen from decades of political inactivity.
Ahed is one of many young women who in the coming years will lead the resistance to Israeli rule. She is not interested in the spotlight currently being aimed at her due to her arrest, but in genuine change. She is not the product of one of the old parties or movements, and in her actions she is sending a message: In order to survive, we must candidly face our weaknesses and vanquish our fears.
In this situation, the greatest duty of me and my generation is to support her and to make way; to restrain ourselves and not to try to corrupt and imprison this young generation in the old culture and ideologies in which we grew up.
Ahed, no parent in the world yearns to see his daughter spending her days in a detention cell. However, Ahed, no one could be prouder than I am of you. You and your generation are courageous enough, at last, to win. Your actions and courage fill me with awe and bring tears to my eyes. But in accordance with your request, these are not tears of sadness or regret, but rather tears of struggle.
Bassem Tamimi is a Palestinian activist. 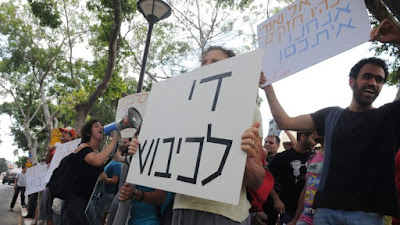 'We Won't Take Part in Occupation': Dozens of Teens Refuse to Enlist in Israeli Army in Letter to Netanyahu.

Dozens of Israeli teens: 'We refuse to enlist out of a commitment to peace'


[1] Cito textual del texto en su versión en inglés: Affirming the importance of the Old City of Jerusalem and its Walls for the three monotheistic religions, also affirming that nothing in the current decision, which aims, inter alia, at the safeguarding of the cultural heritage of Palestine and the distinctive character of East Jerusalem, shall in any way affect the relevant Security Council and United Nations resolutions and decisions on the legal status of Palestine and Jerusalem, http://unesdoc.unesco.org/images/0024/002462/246215e.pdf.
Publicado por José Hamra Sassón en 10/12/2017 01:57:00 p. m. No hay comentarios.: 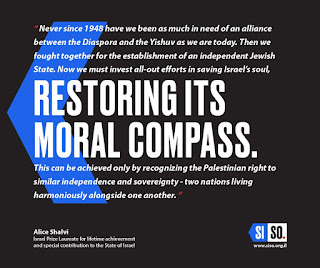 Remember "Baghdad Bob," Saddam Hussein's information minister? During the Iraq war, as the cameras showed U.S. tanks rolling through Baghdad, he took to the airwaves to assure his fellow Iraqis that not a single enemy tank had penetrated the city's defenses.

As it happens, "Bob," whose real name was Muhammad Said al-Sahhaf, was a long-time expert in manufacturing absurd lies for domestic consumption. Already in the early 70s, in his role as director of Iraqi Radio and Television, he had produced a list of "legitimate" Iraqi songs by the magical means of transforming music that had been composed by Jews into "traditional folk songs."

Among the illustrious composers and musicians thus erased from Iraqi history were two brothers: Salah (1908-1986) and Daoud (1910-1976) al-Kuwaiti. An integral part of Baghdad's artistic scene during the 1930s and 40s, the al-Kuwaiti brothers wrote music for King Faisal's 1936 coronation ceremony and headed the Iraqi radio orchestra. Their songs, performed by leading Arab vocalists like Um-Kultum and Muhammad Abdel-Wahab, were popular throughout the Arab world.

In 1951, the al-Kuwaiti brothers were among the 120,000 Jews forced to flee Iraq for Israel, leaving their wealth and prestige behind. When they arrived in the reborn Jewish state, a small country straining under a doubling of its population in the first few years after independence, they were placed with the rest of the Iraqi Jewish refugees in a temporary tent camp.

If the change in physical circumstances was extreme, the cultural transition was no less difficult. In Iraq the brothers had belonged to the elite; in Israel they were relatively unknown. Moreover, the regnant cultural ethos in those early decades of state-building called for fashioning a "new Jew" by "negating the Diaspora"; the Diaspora emphatically included the world with which the music of the al-Kuwaitis was associated. Worse still, that music was by definition identified with the culture of Israel's arch-enemies.

As a consequence, and even though the al-Kuwaitis continued to perform for Voice of Israel broadcasts in Arabic, their work was relegated to a musical ghetto. Compounding the humiliation was the fact that on Iraqi and Arab radio, thanks to "Baghdad Bob," credit for their songs was now being assigned to other artists. In these and other ways, the al-Kuwaitis' experience in Israel was representative of the fate of many in that transitional generation, marginalized from within and erased from without, their culture lost somewhere in-between.
By the end of his career, Daoud al-Kuwaiti had become so discouraged that he forbade his children to become musicians.  Although they themselves dutifully complied with their father's wishes, Daoud's grandson, born in 1977 and named for his illustrious grandfather, did not—and therein lies the second half of the story.

From an early age, it was clear that David (Dudu) Tassa had been blessed with his grandfather's musical talent. Young Tassa released his first album when he was only thirteen, and within a few years had developed into an accomplished vocalist and guitarist, one of those rare artists appreciated by critics, the public, and fellow musicians.

Tassa's standard sound is a mixture of rock and soul sustained by a sophisticated pop sensibility. But he also knows his way around classic Zionist anthems. And now, on his recently released and acclaimed eighth disc, Dudu Tassa and the Kuwaitis, he has further pushed the boundaries of his repertoire by reinterpreting songs written by his grandfather and great-uncle.

That is no easy task. As Tassa writes in the album's liner notes, even though he grew up with Arabic songs in his home, his professional diet was Western popular music, and the two vocabularies are very different. Even more difficult to digest were the al-Kuwaitis' lyrics, full of typically Iraqi "pathos and drama." Only slowly did Tassa learn to appreciate the brothers' literary and musical depth. In the end, he re-arranged the originals, adding Western rhythms and instrumental colors (there are no guitars in Arab music). The album, performed entirely in Arabic, is fittingly dedicated "to all of the musicians who brought [to Israel] . . . a magnificent culture."

On one level, Dudu Tassa and the Kuwaitis represents a ground-breaking experiment in musical sound, dubbed by one critic "Iraq 'n' roll." But the sound is also a poignant one—the sound of a grandson getting to know the grandfather he never met—and it embodies, as well, an act of recovery, bringing back into the musical mainstream the work of two musicians who were forgotten in the twists and turns of history.

Nor is that all. Melding the old and the new, Tassa's interpretation of the original Iraqi sound is an exercise in generational bridge-building, reflecting an increasingly common desire among many Israelis to explore the cultures their grandparents were compelled to set aside as part of their absorption process.  Not Ben-Gurion's "negation of the Diaspora," this is rather an "ingathering of the exiles," an ingathering that includes the cultures of the exiles.

Perhaps most significantly, Dudu Tassa and the Kuwaitis can be seen as an expression of Israeli cultural self-confidence—of liberation from the idea that Western styles are the sole criterion of good music. Israel is, after all, the place where Jewish communities have come together from all over the world, and it is only natural that its music should reflect the resulting synthesis. That the Arabic language is a very large component of Israel's cultural heritage, the medium in which millions of Jews have thought, felt, and created, is one of the ironies forthrightly embraced in Dudu Tassa and the Kuwaitis. Among its many other virtues, the album reminds us that "the language of the enemy" is also the language of a towering medieval philosopher like Maimonides and of modern Jewish artists like the brothers al-Kuwaiti.

"Winn Ya' Galub" (Cry, My Heart), by the al-Kuwaiti brothers: